It may surprise some of my readers to learn that my vintage Speedwell loopframe was not my first red bike (though I use the term “bike” loosely as I am not referring to a two wheeled vehicle but a three wheeled one, as the title of this post implies). Not only that, but my initial red steed was the object of some fame in its early days…

I entered it into a bike decorating competition in one of the towns where I grew up – Inverell, NSW. Inverell has an annual festival called the Floral Festival.  This festival is still celebrated and apparently it still has cycle related festivities.

Anyway, back in 1961, I was told about the competition at school and that the entrants would take part in the annual Floral Parade along the main street.  I came home and told my mother about it and pleaded that we enter me and my red tricycle into the parade. The result:

Apparently, it was a neighbourhood task to decorate the trike like this, with not only my mother, but others also contributing to the gorgeous, flowery result. When we had photos taken, my little sister, not to be left out, demanded that she and her dinky be included: 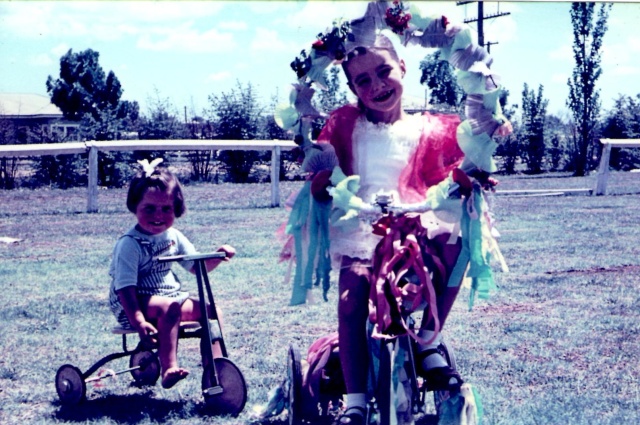 I did not win, although I did get an honourable mention in the parade coverage as I rode along the main street in the parade with the more illustrious entrants on their “two wheelers”. My father was told that there was a conflict of interests, the details of which I do not recall, which meant that they could not award me with the prize, which I am sure I deserved (or maybe my poor mother deserved it).

This bike was a red shiny machine, a Cyclops, I got it brand new and it had a shimmery paint job that I can still remember although I do not remember the festival ride, unfortunately. One especially nice feature was the rear stand which allowed pillion passengers to be carried,  and also the red handgrips with their streamers and handguards, not unlike a sword might have. You can also see that it has a small aerial and little rack at the front, it must have been a classy model with all those features!

This entry was posted in Uncategorized, Vintage bike and tagged about me, cycle chic, Cyclops tricycle, kids on bikes, vintage bike. Bookmark the permalink.

4 Responses to My decorated tricycle