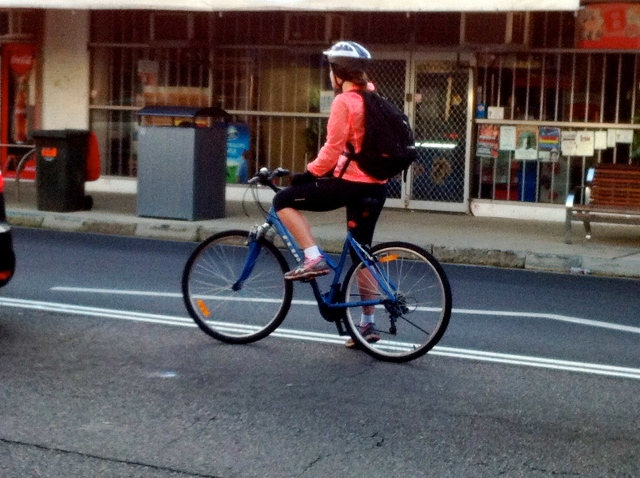 With winter well and truly upon us now, there are fewer bike commuters out there, this one above was one of the very few I saw today. So when my beloved suggested that he may start commuting by bike, I was highly surprised! His usual reaction when I suggest riding anywhere is “Ride!?!? It’s FAR too far/hilly/hot/cold/windy…” etc. But the winter weight he is starting to gain has meant he is prepared to resort to desperate measures, which includes, possibly, riding to work.

He does have a bike, it is what is referred to in polite bikey parlance as a “beater bike” and is the one that cost about $100 at K Mart and sits in the back room gathering dust and cobwebs on its poorly adjusted brakes and gears and squeaky chain (a situation that he is perfectly happy about). He used to ride to work a few years ago, an 18k round trip, and he is a stronger rider than I am in spite of his aversion to riding, so should cope with the approximately 40k round trip he would now have, though he spends his workday standing and is sure he will feel it in his legs at first.

As he works at Belmont and we live at Adamstown, he is superbly well placed to ride Fernleigh Track, the only drawback being that he would need to ride in darkness in the morning. The bollards, shown above, apparently reflect well at night in bike light, and now have additional reflective tape on them to indicate their encroachment onto the track. He will most likely take my Giant, which seldom gets any use nowadays, as it is likely to be a more comfortable ride for him as well as being quicker than his bike, and my Bennett would be too small for him to ride without him possibly hitting the bars with his knees, though it is a quicker bike. I will certainly report on any progress if he does begin commuting by bike, which he will start one day a week at first, then build up to more days up as he gets stronger. He will also have to work out how to dress to ride into work in the cold, then home in the hotter part of the day.  As his workplace is in a new building, there is a showering facility at his work to cater for bike riders, although it is apparently never used at present.

This entry was posted in Uncategorized and tagged bike commuting, Bike tracks, Fernleigh, transportation, women on bikes. Bookmark the permalink.

4 Responses to Commuting by bike