So here is the Bennett that I have been working on all year, albeit with many work breaks. It is still not completed, but the remaining things to be done are minor and the bike works very well as it is now. Obviously from this photo, the front mudguard needs to be refitted to be closer to the tyre and the rack needs to be straightened, jobs which could prove to be complicated for me, which is why I have not tackled them at this stage.

The frame is too small for me, technically, and there were many times when I was working on it, thinking that after all the work I am putting into it, the bike will not be rideable for me and I will have to sell it or give it away; however, that has not proven to be the case. 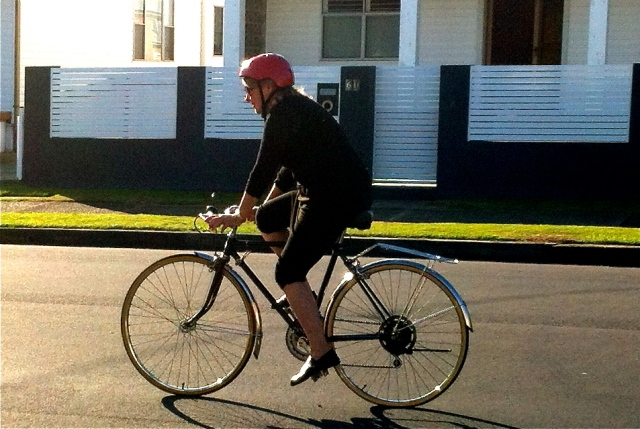 The riding position may look cramped but it feels good, better than when I am more stretched out on a larger frame with drop bars, as such a position makes my back feel unsupported and eventually painful. This does not happen on the Bennett. 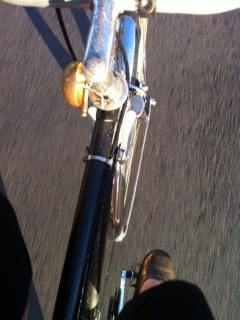 There is some toe overlap and also some overlap of my knee with the end of the handlebars when doing an extreme turn, but these hindrances do not affect me when riding so I simply take them into account when turning the bike in a standing position.

I am happy with the appearance of the bike, the alloy components polished up well and this work was done many months ago but they have retained their shine. The new mudguards look great with those parts and they have received many compliments, with even bike shop staff thinking they were original components that I restored myself! 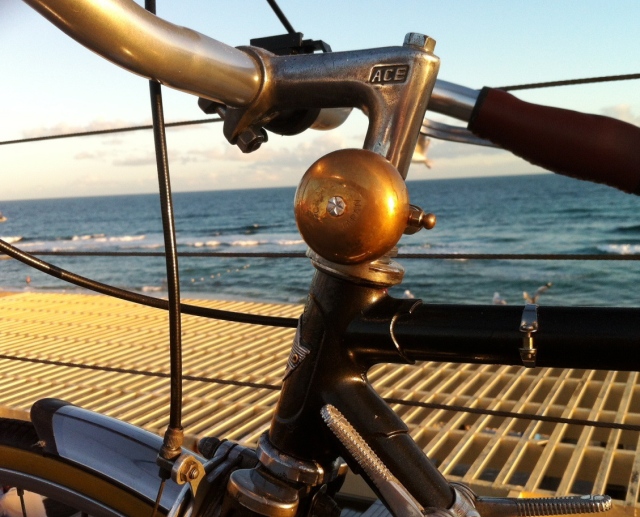 The slightly tarnished brass bell adds to the vintage look of the bike and is better placed on the gooseneck than the bars where it was originally placed in terms of being easier to use, I also like this look. (I put the original and somewhat regal looking black bell on another bike …) I feel that the overall black and silver look of the bike is softened a bit by the brass, the leather and vinyl of the saddle and handgrips, and the gumwall tyres, though it still looks  a bit masculine. I may ask my daughter to add some gold outlining to the lugs as she suggested that would soften the look further.

This is a close up of the bars before I fitted the grips and which I picked up cheaply at Maurice Mathe’s, I am not sure how they would be described, they are not moustache bars but they are somewhat close to them in style.

The really great thing about this bike is its speed and ease of riding on longer (for me) rides, such as when I ride Fernleigh Track, a 30k round trip. I did not think I would really need a bike such as this and that I would not get much use from it, but I have found that when I want to get somewhere faster than I can on my Speedwell, this bike is the one to use. The rack is also really useful for throwing my panniers onto when I have extra things I need to carry, I just lift the mousetrap, throw over the panniers and voila, ready to go! When I want to shop, I simply lift them off and use the carry handle so they are like a double briefcase … 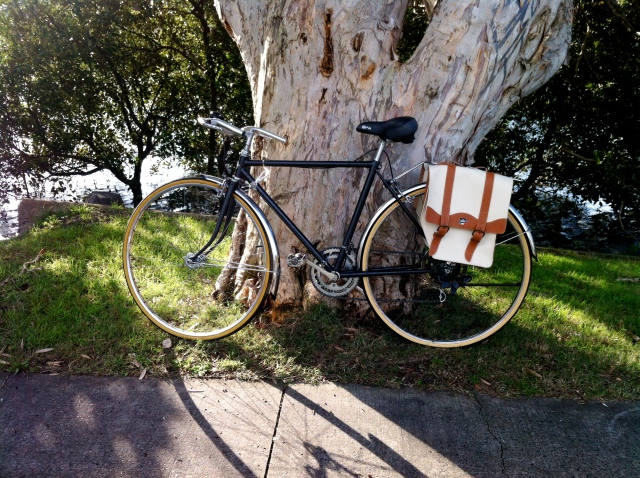 The whole process of restoring this bike (which was mostly in good working order when I was given it) has made me appreciate even more the ride quality of older bikes, and while it is not the comfortable upright ride that my Speedwell is, it is my second most used bike now, and for many years it was just sitting in someone’s garage! For the full set of posts about this restoration, see here.