Bikes (and other things) around Newcastle lately

Yesterday I was surprised to see not one but two adults commuting by scooter, could this be a new trend around here? I was also shocked to see this in a shop window in Islington: 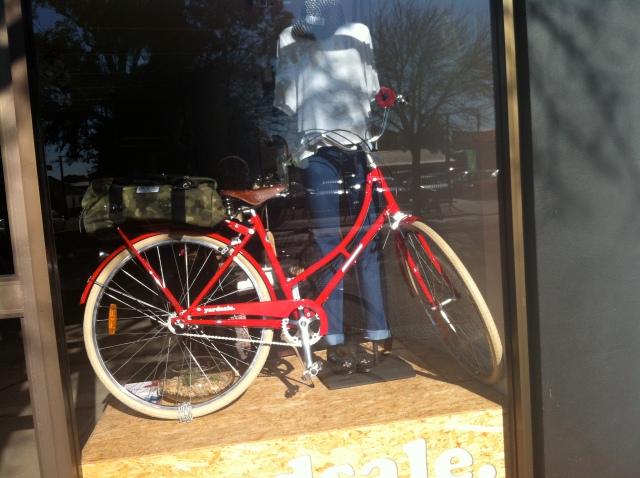 So very like my Speedwell, only much newer of course. And speaking of Speedwells, I saw this one at Adamstown markets one Sunday about a month ago:

See the headbadge and lugs …

And the retro style stack hat! Thi sbike looks as though it has been dragged out of the garage, given a new set of tyres, then been ridden, dust and rust and all. He didn’t even lock it up, no doubt thinking the rust and dirt would be a suitable deterrent to would be thieves. Then, a reader sent me this photo of a 1956 Speedwell:

Same lugs as the one above it and see the pinstriping on the wheels! I used to have the same on my Speedwell in its first life… I believe it has gone to a good home though.

Luckily I stopped to talk to Daniel the other day because he told me he could lift the handlebars on my bike: 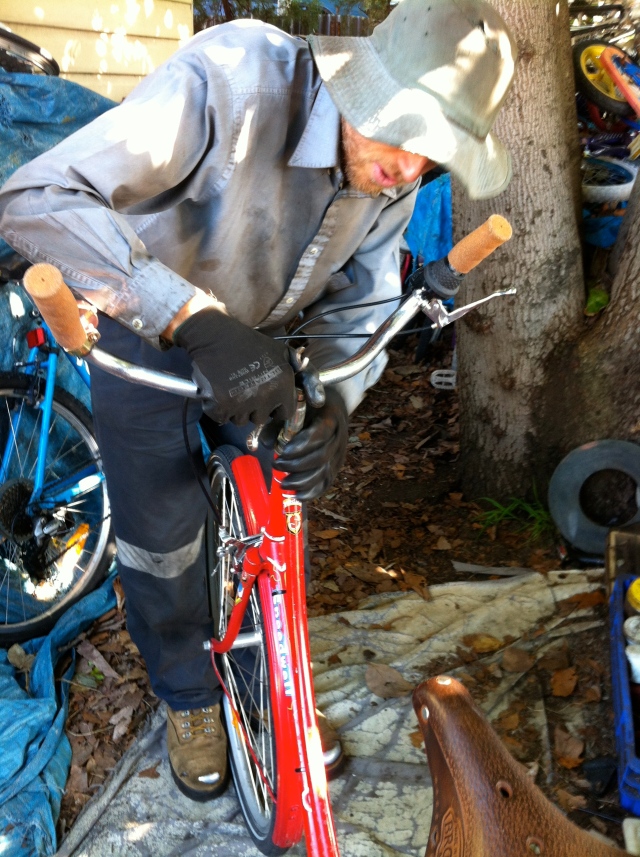 It’s a 3 step procedure: loosen the nut at the top, hit it with a hammer, then lift. I took off the torch holder at the same time as it gets in the way on the basket, but I know I can always go there and get one if I need it.

Meanwhile, it is great to see so much new bike infrastructure being built here lately …

This is the corner of Kings Road and St James Rd near the Adamstown gates crossing. The new ramps to the new path make a big difference when cycling this area. And check out the NCM blog for two new big additions to the cycleways network and also for maps of the local bike paths.

I have been thinking about the Tweed Ride and how wonderful it was to meet all the Newcastle bloggers who were there, some of them I met for the first time that day. Nothing like a retro bike event to get everyone out on their bikes, it was a great day. Thank you Peter, the new recyclist, Linda of Pink Patent Mary Janes, Michael of Show Bag Tumblr, K from I Cycle Newcastle and Mark from Hamilton North. Without the support of all you bloggers, the Tweed Ride would not have been such a success.

1 Response to Bikes (and other things) around Newcastle lately