Although I have written about the benefits of an ebike before, I had not actually ridden one until last weekend. It was to attend a meeting at Nobbys lighthouse cottage and, as I did not have my bike with me, this Gazelle ebike was offered to me for transport. 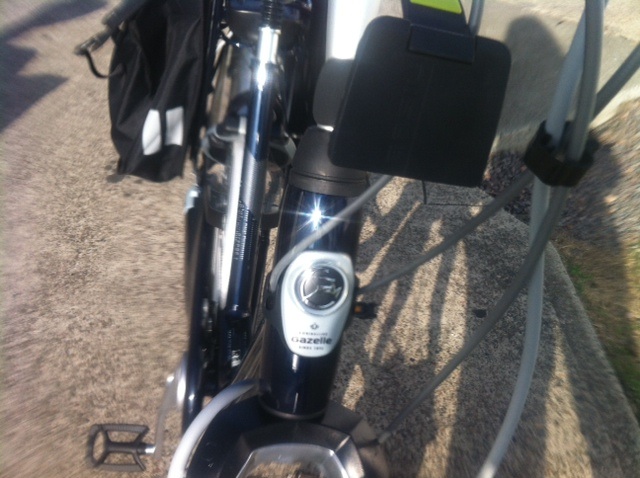 I have to say it was a great riding experience and this is why: the Gazelle is a high quality bike with first class inclusions. Also, the electric motor is an experience in itself. It is totally silent, which, when combined with the newness of the bike, makes this a truly smooth and silent ride. It also does not just propel you along, because if you don’t pedal, you don’t move. The motor matches the effort the rider puts in, so you can’t just slacken off and tag along for the ride, which is definitely a temptation with a bike like this. Acceleration on taking off, however, is fantastically powerful and would be very useful at traffic lights and intersections. There is also an extra speed boost function activated via the control panel which is helpfully located near the left handgrip and merely requires a thumb press to activate or to change the settings. Additionally, there are 7 gears in an internally geared Shimano hub. I must admit that having the extra power readily available proved too tempting to me and that for most of the time I rode it I had the motor activated, though I only used the additional power boost function when riding up the very steep hill to the lighthouse. And I was able to ride the whole way up that hill, arguably the steepest in Newcastle, without walking!
I don’t have a need for an ebike, but if I had a long and/or hilly commute, an ebike could make riding to work everyday a much more likely probability. Anyone who is put off some of their riding because of those reasons would be well placed to get a bike like this one. If it makes you ride, or ride more often, it would be well worth the investment.

A new bike shop will soon be opening in Newcastle selling these bikes, enquiries can be made via … sales@metrocycles.com.au or phone 0438 556378.
On-line sales  are coming soon and the Newcastle West shop is opening in July.

4 Responses to Riding an ebike