There have been many changes around Newcastle lately. The biggest one is the cutting of the rail line and terminating of trains at Hamilton. This has created a lot of havoc as it means the traffic around the station has doubled, with more pedestrians and now shuttle buses taking people into town after they get off the train. Bikes are not allowed on buses and many riders don’t know which way to ride safely into town. The Throsby creek path is not far away from there and is the safest way to get into town at present.

Other bike related projects are also progressing with the Bathers Way project along the sea front. This will connect all the beaches from Nobbys Beach and the harbour to Merewether Beach for both pedestrians and cyclists. The most spectacular part of this project is the Anzac Memorial Walk which accesses scenic views over both city and sea.

Meanwhile, however, Hunter Street languishes as decisions are not being made about the future of the rail line which may impact on how new bike paths are to be installed.
But that has not stopped the growing cycling culture in Newcastle.

Old bikes being restored and  ridden and new bikes all around town. See this shot taken outside Bank Corner Cafe, it was hard to find a place to lock up my bike that day …

And with a new bike shop opened right next door and murals around the corner in the laneway, it is working well as a place where people like to gather … 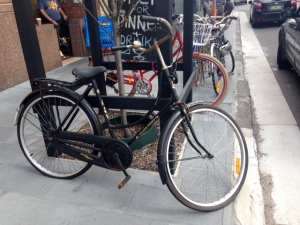 With state elections getting closer every day, promises for new bike lanes have been an election promise made by one of the major parties, demonstrating that the need to adopt cycling as transport is becoming a major issue in this region.

This entry was posted in Uncategorized and tagged art, hamilton, Hunter St, newcastle. Bookmark the permalink.